WILLIAM BAILEY at the Century Club
By Eric Holzman 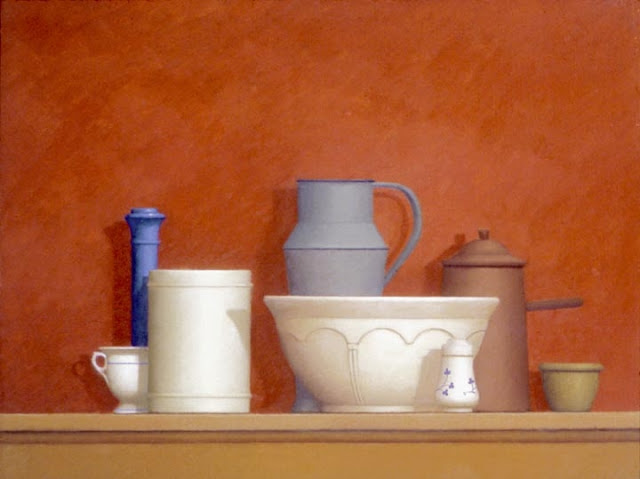 For years I‘ve seen William Bailey as a revolutionary painter. He is a most unlikely painter for these times, and surely an unlikely revolutionary as well. While sitting with notes and memories of his show at the Century Club, the words of the mystic, revolutionary and all around trouble maker, Jesus Christ came too me, "Be in this world but not of it." In a similar way, Bailey seems to have turned inward, away from consensus reality to find and sustain his personal vision throughout his long life and, unswerving career. Unlike in attitude, stance, and intention to nearly every modern painter to date, Bailey seems to take our well being into account as well as the saving of his own soul, as if it were an element of his professional practice. His intent is not to take anything from us or to impose; he is no infant terrible. He doesn’t want to have his way with us, nor is he an aggressor. There is no unconscious conflict raging to be worked out in public, to which we the audience must be privy. In these ways his art is not art for art's sake, or for ego’s sake, but responsible grown up art of the highest ambition - to enrich and illuminate the culture from which it comes. He has turned away from what to me are some overriding legacies and fundamental tendencies of Modernism. Bailey it seems has tuned himself into an entirely different frequency from which to channel and make his painting. And I ask myself, how does one make paintings that engage visually, painting that is spiritually rewarding, and painting that need not overturn, or turn away from the past? Also I ask how does one make art that is not thoroughly abstracted of its emotional content for fear of appearing soft or sentimental.

Bailey’s work seems more sophisticated, complex, and in some ways more difficult than many artists with seemingly similar ambitions. It unifies and reckons with desire and puritanism, with tradition and modernism, with romantic longing, connection and tenderness, and with the awful distancing of austerity and fear. There is wisdom in this work and in its stance. The artist himself contains all of these aforementioned traits, as we all do in different measure, and the miracle is that he has alchemically found a way to live and paint them with dignity and serenity. 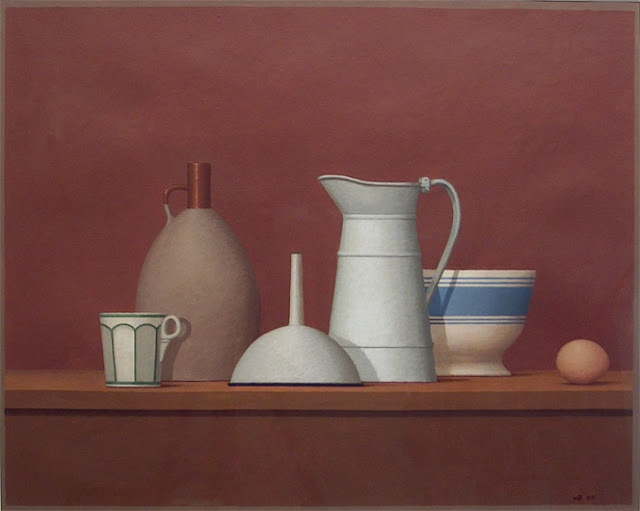 It’s no news that our world is driven largely by materialism and consumerism. When most of us enter it, we are encouraged with differing degrees of force to suppress our emotions and our instincts. Love is often with-held. Affection and attention are connected to systems of reward and punishment based on achievment and behavior. Our culture teaches us to mistrust, even fear our inner guidance, and we feel cut off from spirit and from what is sacred. We call god and spirit dead. We wonder if we have any value at all and or whether we are even worthy of our existence. This is quite a violent scenario, and it’s no wonder that this violence is then acted out in other areas of life.  Most of us are medicated in one way or another to deal with the madness. Against this backdrop, sensitive and brilliant artists have mimicked in one way or another aspects of the dysfunctional world into which they are born. We diminish heart, emotion and soul in our work. Many major artists of the modern era have tended to do this consciously and unconsciously. Warhol’s studio was "The Factory" named ironically, to emphasize the machine-made, impersonal, and mass-produced. Other artists express the flip side of the coin - violence, rage and frustration. One way or another like nearly everyone else in our culture, artists have succumbed to the impulse to deny themselves, or become numb to the possibility of a sane, full, compassionate, vibrant, loving life. A life that I sense and believe strongly lives somewhere inside, sometimes deeply buried in all of our hearts.

Bailey is of another intent. He is an artist of Mid-western restraint and he retains some of the best values of his origins. His paintings offer a brush with the eternal, and the sensual, the Mediteranean sensability, and they project a stable, humble, even noble confidence. It is a painted world that is relatively safe and peaceful, and this is a radical vision. 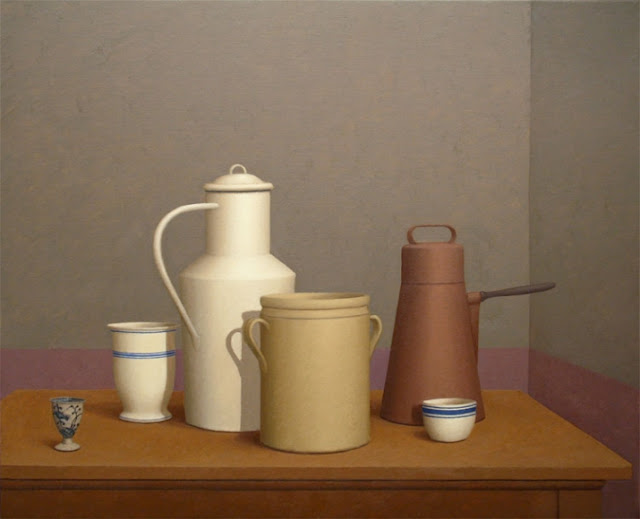 Contemporary quantum physics, and both ancient and contemporary spiritual masters teach that our thoughts and feelings are of real stuff, realer in fact than the physical reality that seems so convincing to our senses. Our thoughts and feelings are the machinery that creates the mirror that is the world in which we live. In fact there is no world out there, so much as the world we experience as a reflection of our inner world, our projections. Fairfield Porter said it too in a way. In painting, it is all decision; there is no objective world by which to measure the success of a painting. There is no there there. Reality is a puritanical myth.

In Bailey’s work there is no attempt to accurately reproduce "Reality". But deceptively and stubbornly, even ironically, Bailey's paintings are powerful meditations on the meanings of abstraction and representation in painting. They maintain a workman-like purity and a simplicity of execution. Abstract elements in his art are distinctly and unquestionably formalist, modernist, timeless and deeply felt.

As a means, an approach or a strategy, modeling is very rarely used in great modern painting. But in William Bailey's paintings forms are turned in space with the artist’s slow, careful, touch. It is a look that almost vanished with the discoveries and inventions of the Impressionists, but ultimately modeling is just as abstract in conception and execution as daubs or flat sheets of color and can be of equal delight to the eye. Yet as Bailey models in color (and paint), he retains the surface as all great painting naturally does. In the large open areas such as the walls of his interiors and still lives, his painted planes feel a-kin to early Marden, physical and monumental, deeply resonant and tough. Bailey’s color is reduced in pitch to earthy tones that resonate warmly in subdued sonorous harmonics. The back room of Betty Cunningham’s twenty-fifth street gallery was transformed into a chapel when Bailey showed his work in that space. 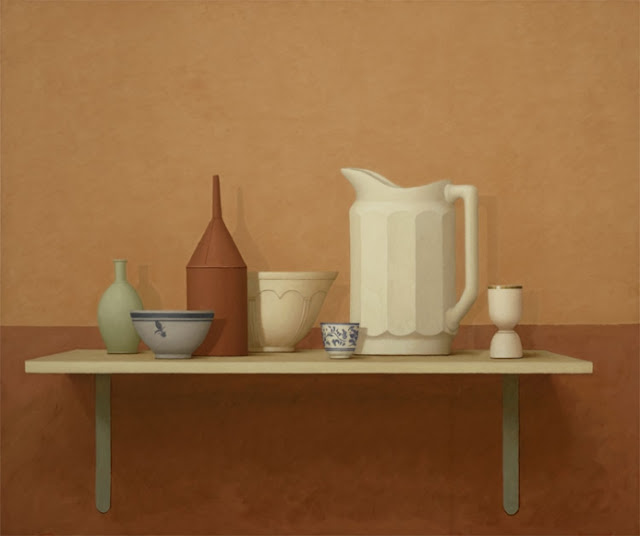 William Bailey, Ceremony, 2006, Oil on linen, 40 x 48 inches
Further, I find his still life objects lock together on the surface in a sure but uncanny way. His rhythms and shapes surprisingly suggest to me something of Gorky’s delicate, incisive, surreal line which runs through the field playing between positive and negative, dancing quietly and playfully across the surface. In the figure paintings, it may be fun to notice an object, a cigarette or a cell phone that reassures us by placing both ourselves and the paintings, in our proper time and space. But reading the paintings literally and looking for a signifier such as a cell phone or some other object to reassure us that these are justifiably modern, is totally unnecessary and only shows how far we are from being able to discern painterly language - the language of the heart - when we are face to face with it, and how addicted we are to sensationalism. Bailey's friend, Al Held called it pitifully, "the necessity of every young artist to reinvent the wheel". 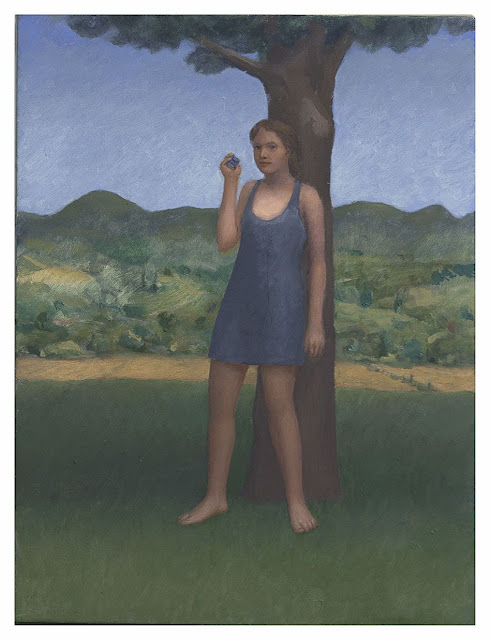 One way to look at these paintings is to follow the way the paint moves from the forehead through the brow into the eye, and then how it creates the nose and moves toward the lips, to the chin and into the neck. Every passage disappears democratically into the whole. A human lifetime painted into and between every stroke.
This work of Bailey’s brings answers to old questions such as, where does individual personality end and the eternal begin. The work is odd enough, even "wrong" enough academically to let us know from the get go that we are engaged in a world of metaphor and poetry, a dialog between the physical and spiritual, where harmony and innocence offer some visual answer to such a seemingly unsettling existence, whose physical finale we all ultimately share. 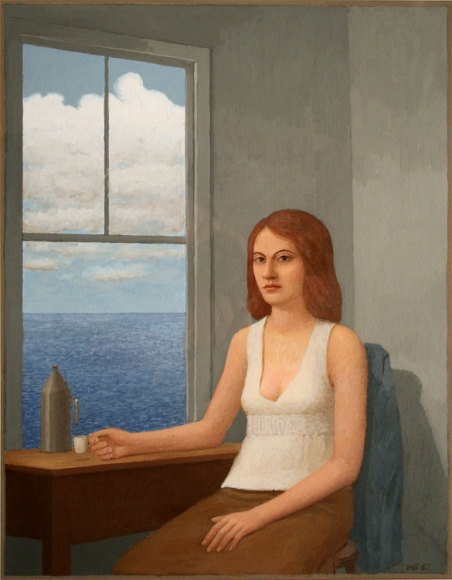 Bailey offers in his painting a place to be quiet, to slowdown, to meditate, to feel ourelves. The question is not how good are these paintings, or are they modern enough. The question is can we meet them where they live; where softness, introspection and kindness are virtues. We are creating our futures now, and I prefer his vision much more than most. It is a courageous stance, a vision of gentleness which requires ferocity and integrity.

All Images from Betty Cunningham Gallery Website
Posted by S.A. at 16:50