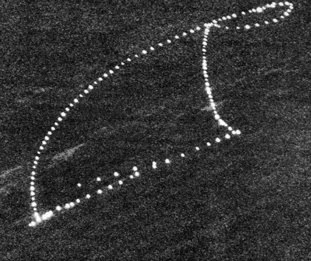 Dennis Oppenheim, Polarities, 1972
The first drawing of Dennis' young daughter Chandra plotted out with flares in the landscape

Dennis Oppenheim, the great pioneer of conceptual art, body art, earth art, installation, kinetic sculpture and public art has died at 73. His work was always fearless, eccentric, theatrical, funny and haunting. He was an immensely warm and generous person and artist, a sort of sage who was a floating presence to the multitude of mostly younger artists who hung with him. Typically, any conversation would proceed into an exhilarating world of deeply considered ideas laced with adventurous speculation, where Dennis lived. He was dedicated to an investigation of the human condition, of the nature of art, and of the complex relation between the artist and the world -- and he explored that terrain with a body of work that recognized no stylistic bounds. 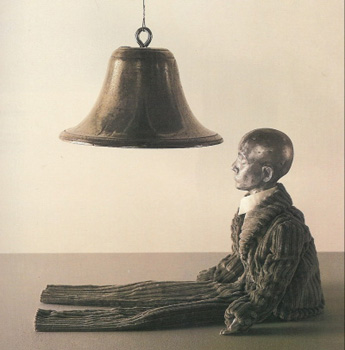 Dennis Oppenheim, Attempt to Raise Hell, 1974
The figure, a self portrait, bangs his brass head against the bell in rhythmic repetition

Here is a passage by Jack Burnham about an Oppenheim performance piece:
In April of 1972 Oppenheim made 2000' Shadow Projection/Carbon Arc Search Light/Trumpet at Batavia, New York in memory of his father. In a sense that is difficult to define, this remains one of the most powerful and mystical works produced by the artist. Standing directly in the center of a beam of brilliant light, Oppenheim's body splits the beam in two. He blows single, sustained notes on a trumpet for the duration of a breath. These occur at intervals of about 20 to 25 seconds each. In a metaphorical sense these trumpet sounds resemble the ritual bringing forth of the pneuma, the spirit or "breath of life". The sound of the trumpet fills the space created by the darkening shadow of Oppenheim's body: "As I blow into the horn away from the light, the sensation of being in two places at once begins to take hold." As a result, the two "images" that Oppenheim has created are both negative; one cannot be seen and must be repeated, and the other remains the absence of light. From Jack Burham, Great Western Salt Works, 1974 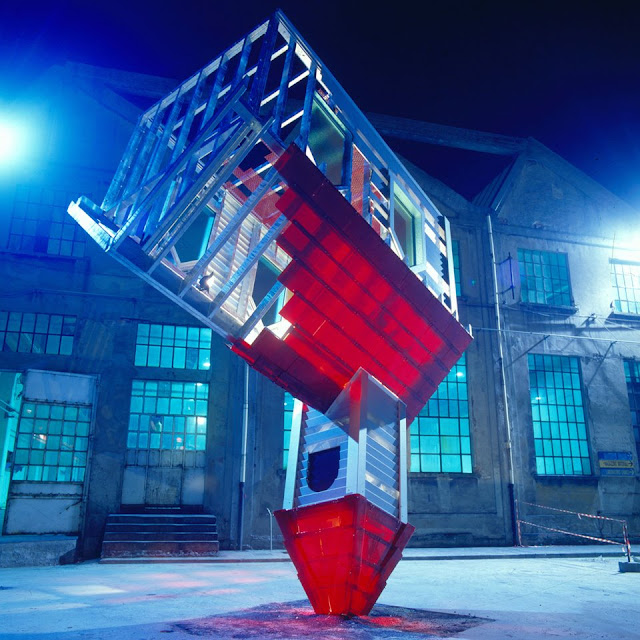 Dennis Oppenheim, Device for Rooting Out Evil, 1997
One of many highly controversial public pieces 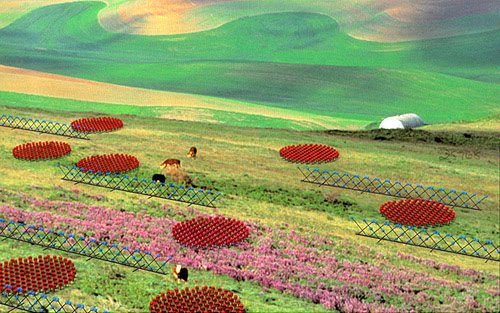